Recently, I left Dublin 4’s newest gastropub, The Donnybrook, after a somewhat meh experience and was undecided as to whether or not I should review at all.

Do we even need gastro pubs anymore, I wondered? Have we moved away from this kind of dining? We initially fell hard for the idea when it first made its way across the English Channel. As a concept, it suited the Celtic Tiger years when we wanted to flash our new-found cash and throw it around on highfalutin things like de-constructed steak and ale pies in pubs that charged €8 for a pint. But with the move away from traditional rigid courses in restaurants and our new grá for snacks and small plates in smart casual eateries, have they become the Merlot of the restaurant scene? Victims of their own popularity, now deemed gauche because they’re mainstream and decidedly middle class?

A post shared by The Donnybrook Gastro Pub (@thedonnybrookgastropub) on Jul 3, 2019 at 5:01am PDT

I’m certainly not about to denigrate the entire gastropub gang, we have some excellent ones, the Old Spot also in Dublin 4 and Stonybatter’s Mulligan’s, along with their neighbour, the Belfry who curate a roster of ever-changing food trucks in their courtyard. And perhaps the Donnybrook in – you’ve guessed it! – Donnybrook will become another favourite once they’ve ironed out some teething issues. On the positive, there’s no deconstructed gastropub notions here at The Donnybrook but as far as evenings go, it was a bit of a mixed bag.

We came to eat on a reasonably quiet Thursday night. The Donnybrook has a large, bright dining room with a central bar effectively dividing the gastro bit from the pub bit. The premises were taken over last year by Oliver Dunne who also owns Cleaver East in Temple Bar and Bon Appetit in Malahide.

A post shared by The Donnybrook Gastro Pub (@thedonnybrookgastropub) on Jun 13, 2019 at 9:31am PDT

The pub side is deserted the night we go and on the food side two lackluster wait-staff shuffle between tables offering the barest minimum in terms of effort and hospitality. The large space feels oddly clinical for what clearly hopes to become a crowd-pleasing family fave.

The menu is replete with solid hits like a tempting burger boasting gruyere and truffle mayo and grass-fed Hereford steaks for a very reasonable €19 and €23. Intriguing cheffy influences also abound. There’s certainly thought given to a younger, perhaps more food-savvy diner with inclusions like a starter of roast peppers stuffed with feta mousse and spiced cashews with butternut squash. A baked salmon main, on paper, sounds delicious served with charmoula spiced falafel and burnt lemon and lime yoghurt but in tasting was muddled and under-seasoned. The falafel were unforgivably dry and the promised burnt lemon and lime flavour, absent entirely. The roast pepper starter suffered from a similar jumble of flavours and little to break up the slightly samey textures. 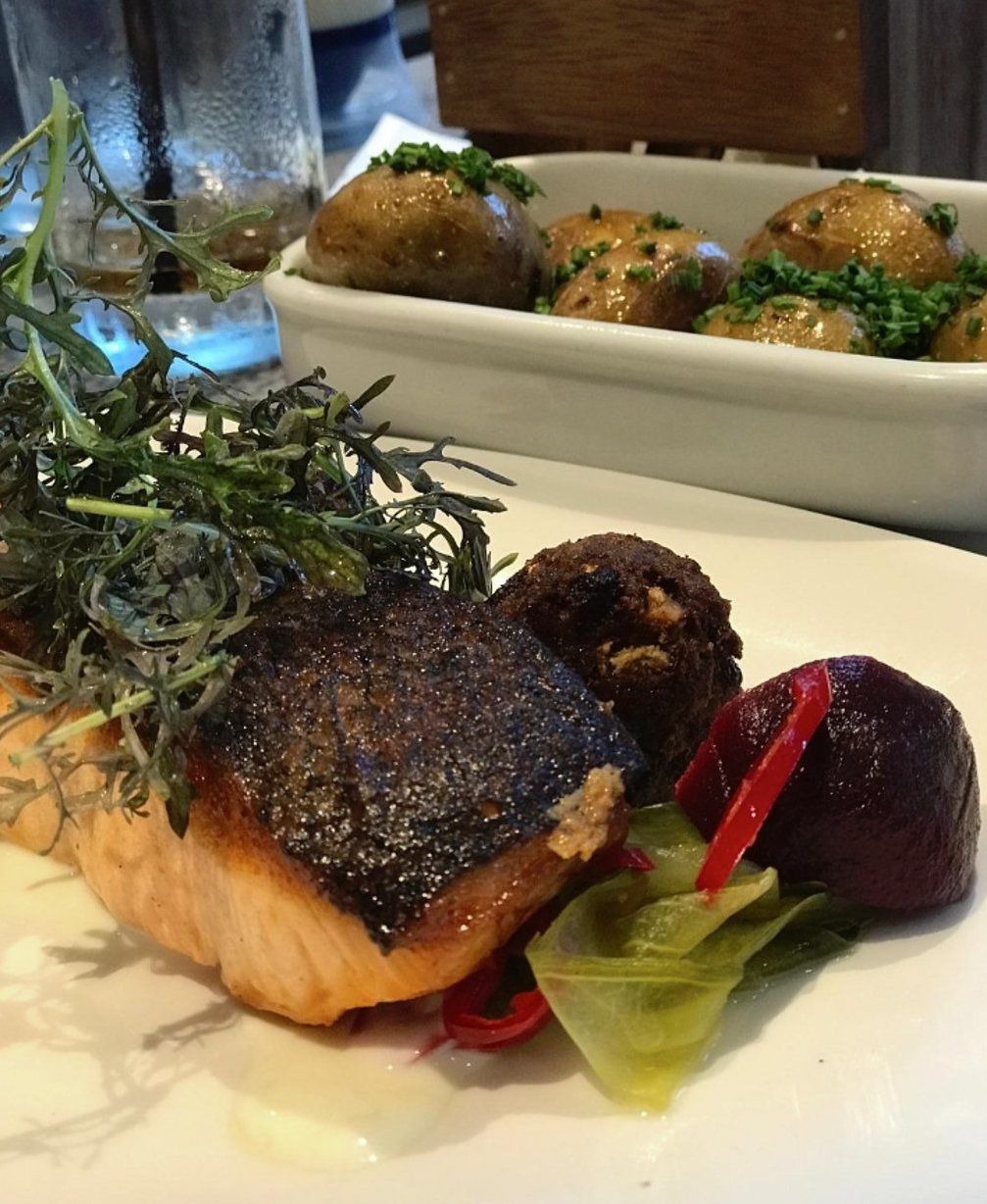 My starter of grilled prawns in confit garlic, chilli and coriander butter was a vastly more successful dish with good spicing and a generous whack of prawns. It was considerably more saucey than I anticipated from the menu description, though no bad thing given said sauce was delicious. 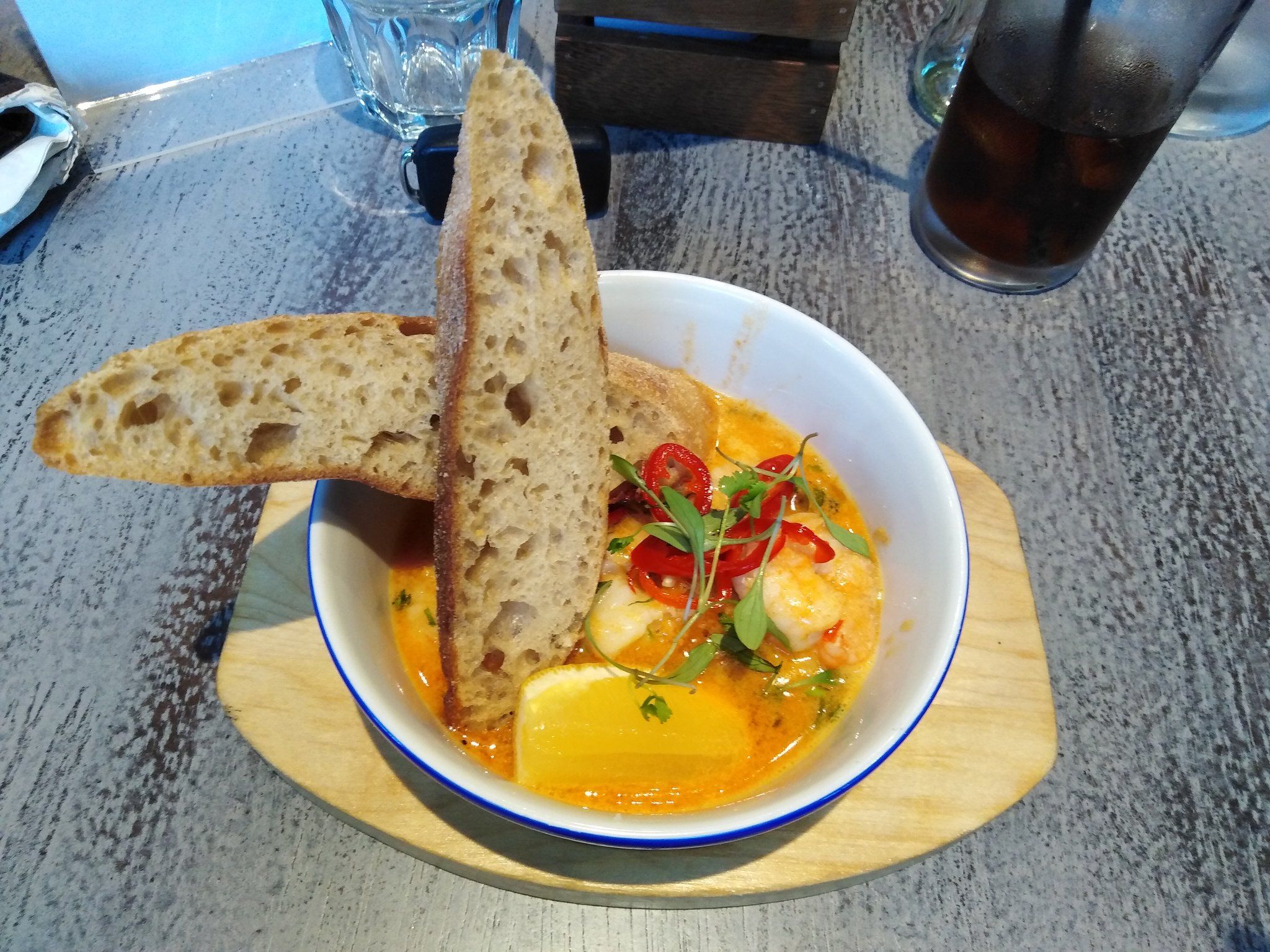 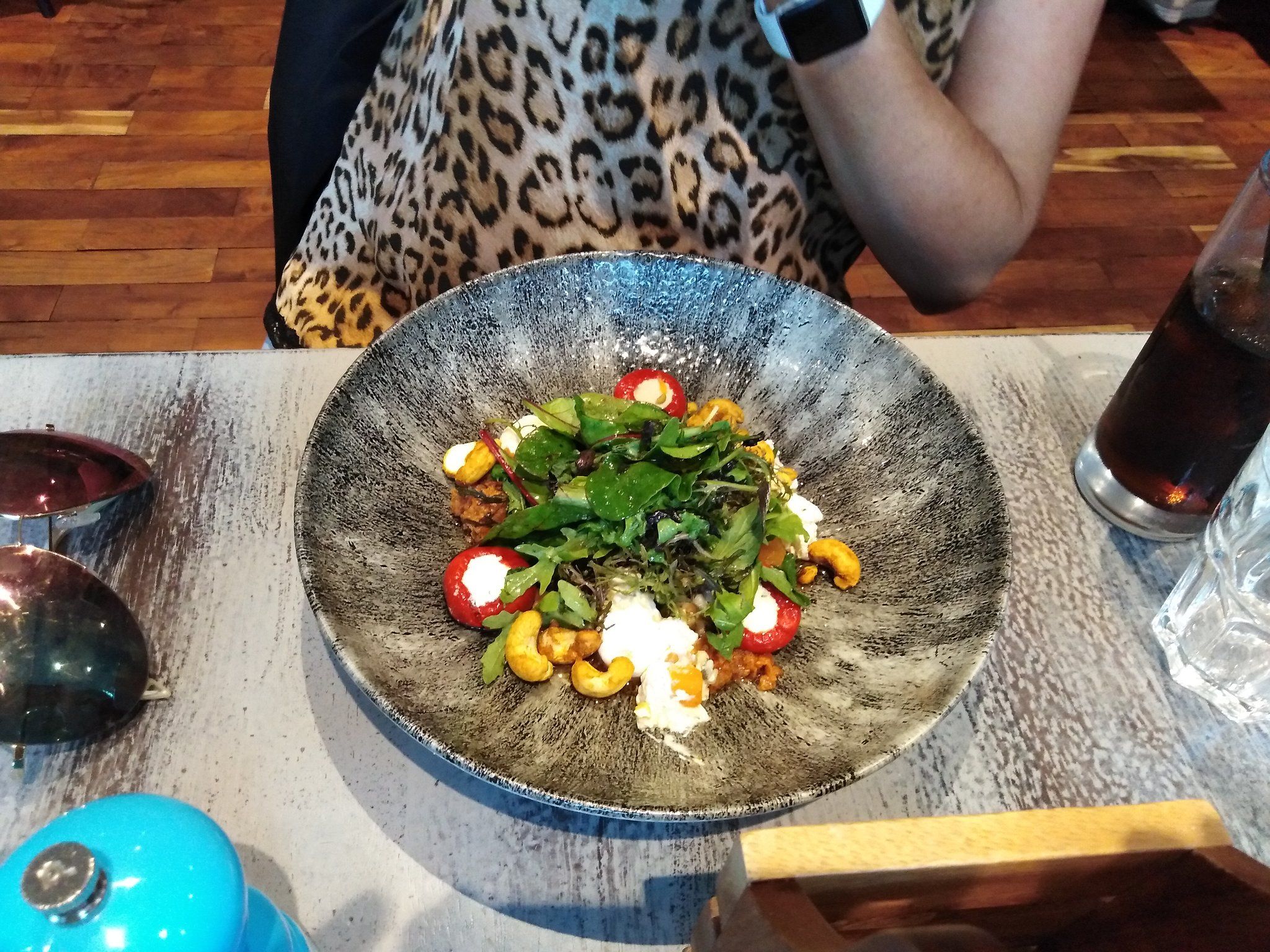 For mains, I opted for a starter portion of wings which were mercifully NOT drenched in the ubiquitous Frank’s hot sauce but instead glazed with black garlic, soy and miso and came sprinkled with sesame and served with Crozier blue thousand island for dipping. I got a side salad of rocket and parmesan and some sweet potato fries. The wings were sticky and moreish though I could not detect so much as a hint of blue cheese in the dip, particularly odd given that Crozier is richer and more robust than its milder sister, Cashel. So bland was the sauce that I actually thought it was a mix-up and asked the server if she could check. She grudgingly acquiesced; trudging over to the kitchen pass to ask and then drifting back over to shrug that yes it was the right one. 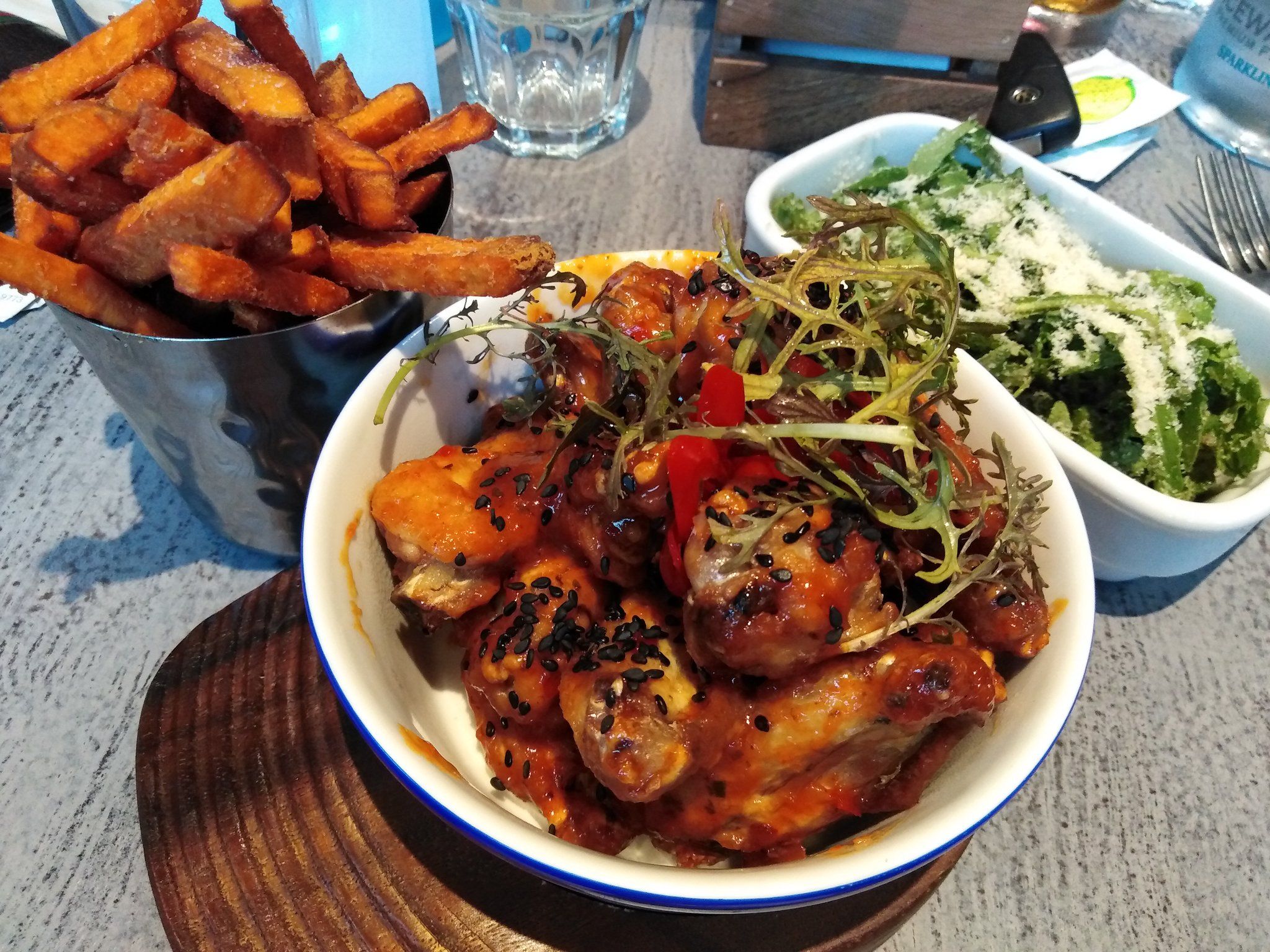 Desserts at The Donnybrook don’t stray far from the old reliables. We ordered the apple crumble with butterscotch and vanilla ice cream which was grand. Ditto the coconut and cacao tarte with passion fruit sorbet. I have been left with some unfinished business regarding the third option: fried fruit donuts served with ice cream. 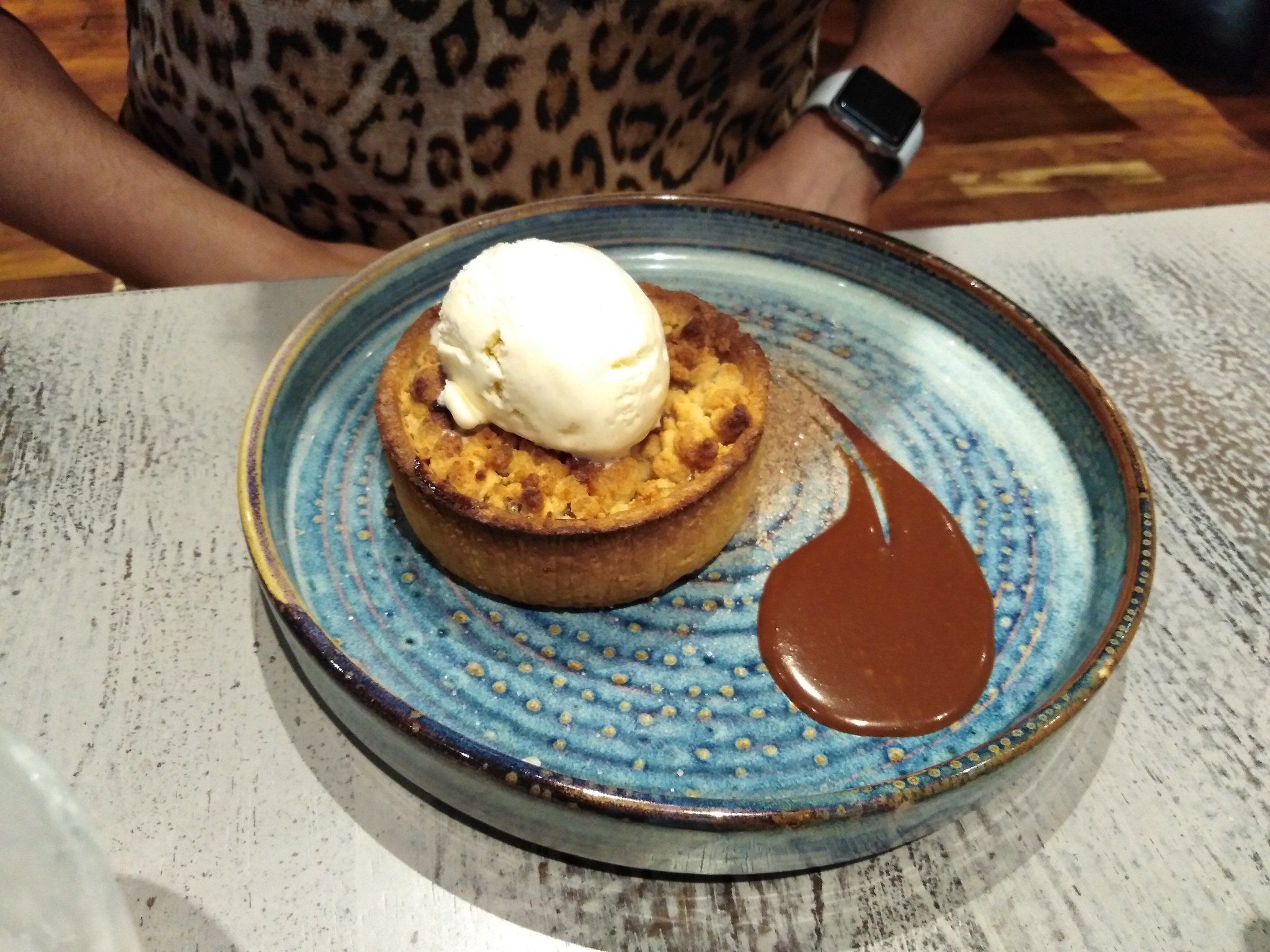 I am certainly not ready to write off The Donnybrook, the service feels like a work in progress that once ironed out will hopefully make this gastropub a warm and lively spot for the neighbourhood. Food-wise, we hit a couple of bum notes but overall it is good value and I will certainly be back to try the white clam and chorizo linguini and the aforementioned donuts.

This review is one person's opinion, on one night. Disagree? Let us know below. Fancy trying it for yourself? Book here.

REVIEW: Prado - Full Of Promise But The Plates In Front Of Us Tell A Damning Story

Datin Dublin: L'Gueuleton Is A Fab Spot For A Date But Be Aware Of The Window Seat

This Dublin Pizzeria Serves Fab Pizzas At Quite Reasonable Prices